I went to the dentist today – had not had my teeth professionally cleaned and the tartar chipped away for longer than I would like to admit. Eyes closed, suction tube in my mouth, my thoughts wandered. Didn’t my uncle Isaac, my mother’s first cousin, tell me that the building constructed by my grandfather in Lviv now housed a dental clinic? Isaac visited several years ago, and the family was surprised to find the building had changed little.

39 Zamartstynivka (the street name is a Ukrainian version of the original Polish Zamarstynowska) sported a white facade – no longer the beige color when first built – but the corner balconies still remained unique and modern in a neighborhood of drab and forgettable architecture. They were rounded with accompanying stylish railings – just as my mother so often recounted. A Bauhaus design in a Ukrainian city not accustomed to such construction.</span>

My grandfather had great hopes for his family and business in the late 1930’s. His lumber business was growing and a move to the big city – Lemberg (now Lviv) was called for. So in 1938, on a lot near his newly acquired sawmill / lumberyard, he began construction on a three story building that he designed. Greatly influenced by his travels while serving in the Austria-Hungarian Army – Budapest, Prague, Vienna – he wanted to build a structure that was reminiscent of the modern architecture he had seen in these great cities.

The family – Yitzhak and Fanny Frucht – my grandparents, and their three daughters Clara, Salka (my mother) and Ester moved into the second floor apartment in July 1939. There were three other apartments in the building on the second and third floors. All with modern amenities including full bathrooms. A post office and candy store occupied the commercial spaces on the first floor. Within two months, the war broke out and the family was forced to house Soviet officers.

I wonder if any of the patients who visit the polyclinic think of the individual who built the structure they are entering. Do the small groups of people waiting for the #9 tram that stops immediately in front of this still modern and uniquely styled building just behind them know that a Jewish man named Yitzhak Frucht was responsible for its construction? That the Frucht family lived there for only eight months before returning to the small village from whence they came, Busk, to avoid Soviet deportation and near certain death in Siberia?  That this building housed a Gestapo prison after the German invasion in the summer of 1941?  That the Frucht family – Fanny and her three daughters – never received any compensation nor recognition for the building that stands to this day.

Alas, July, 1939 was not an auspicious time to embark on such a dream. Yitzhak Frucht did not survive the war. At the age of 46, he was murdered by Ukrainians in the forest outside of Busk. But his uniquely stylish building, a dental clinic since 1980,  still stands in anonymous testimony of his energy, genius and vision. 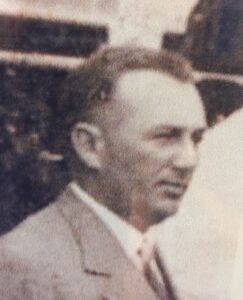 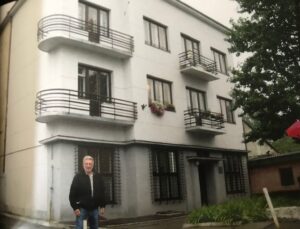