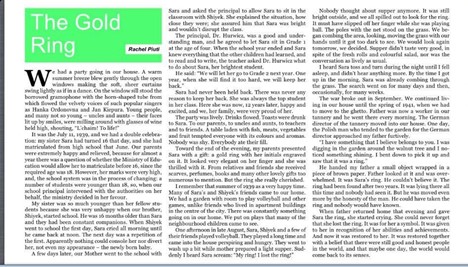 We had a party going in our house. A warm summer breeze blew gently through the open windows making the soft, sheer curtains swing lightly as if in a dance. On the windowsill stood the borrowed gramophone with the horn-shaped tube from which the velvety voices of such  popular singers as Hanka Ordonovna and Jan Kiepura. Young people and many not so young – uncles and aunts – their faces lit up by smiles, were milling around with glasses of wine held high, shouting, “L’chaim! To life!”

It was July 11, 1939, and we had a double celebration: my sister Sara had turned 16 that day, and she had matriculated from high school that June.  Our parents were extremely happy and relieved, because for almost a year there was a question of whether the Ministry of Education would allow her to matriculate before 16,  since the required age was 18.  However, her marks were very high, and the school  system was in the process of changing: a number of students were younger than 18, so when our school principal intervened with the authorities on her behalf, the ministry decided in her favor.

My sister was so much younger than her fellow students because she was very unhappy when our brother, Shiyek, started school.  He was 16 months older than Sara and they had been constant companions. When Shiyek went to school the first day, Sara cried all morning until he came back at noon.  They next day was a repetition of the first.  Apparently, nothing could console her nor divert her, not even my appearance – the newly born baby.

A few days later, our Mother went to the school with Sara and asked the principal to allow Sara to sit in the classroom with Shiyek. She explained the situation, how close they were; she assured him that Sara was  bright and wouldn’t disrupt the class.

The principal, Dr. Hurwicz, was a good and understanding man, and he agreed  to let Sara sit in Grade 1 at the age of four.  When the school ended and Sara knew everything that the other children had learned, and to read and to write, the teacher asked Dr. Hurwicz what to do about Sara, her brightest student.

He said: “We will let her go to Grade 2 next year. One year, when she will find it too hard, we will keep her back.”

Sara had never been held back. There was never any reason to keep her back.  She was always the top student in her class.  Here she was now, 12 years later, happy and excited, and we, her family were very proud of her.

The party was lively.  Drinks flowed.  Toasts were drunk to Sara. To our parents, to uncles and aunts to teachers and to friends.  A table laden with fish, meats, vegetables, and fruits tempted everyone with its colours and aromas.  Nobody was shy.  Everybody ate their fill.

Toward the end of the evening, my parents presented Sara with a gift: a gold ring with her initials engraved on it.  It looked very elegant on her finger and she was thrilled with it.  From relatives and friends, she received scarves, perfumes, books and many other lovely gifts too numerous to mention.  But the ring she really cherished.

I remember that summer of 1939 as a very happy time.  Many of Sara’s and Shiyek’s friends came to our home. We had a garden with room to play volleyball and other games, unlike friends who lived in apartment buildings in the centre of the city.  There was constantly something going on in our home.  We put on plays that many of the neighbourhood children came to see.

One afternoon in later August, Sara, Shiyek, and a few of their friends played volleyball.  They played a long time and came into the house perspiring and hungry.  They went to wash up a bit while mother prepared a light supper.  Suddenly I heard Sara scream: “My ring! I lost the ring!”

Nobody thought about supper anymore. It  was still bright outside. And we all spilled out to look  for the  ring. It must have slipped off her finger while she was playing ball. The poles with the net stood on the grass. We began combing the area, looking, moving the grass with our hands until it got too dark to see. We would look again tomorrow, we decided. Supper didn’t taste very good, in spite of the fresh rolls and colourful salad, nor was the conversation as lively as usual.

I heard Sara toss and tum during the night until I fell asleep, and didn’t hear anything more. By the time I got up io the morning,  Sara was already combing through the grass. The search went on for many days and then, occasionally, for many weeks.

The war broke out in September. We continued in our house until the spring of 1941, when we had to move to the ghetto. Father was now a worker in our tannery and he went there every morning. The German director of the tannery moved  into our house. One day, the Polish man who tended to the garden for the German director approached my father furtively.

“I have something that I believe belongs to you. I was digging in the garden around the walnut tree and I noticed something shining. I bent down to pick it up and saw that it was a ring.”

He handed my father a  mall object wrapped in a piece of brown paper.  Father looked at it and was overwhelmed.  It was Sara’s ring.  He couldn’t believe it.  The ring had been found after two years.  It was lying there all this time, and nobody had seen it.  But he was moved even more by the honesty of the man.  He could have taken the ring and nobody would have known.

When father returned home that evening and gave Sara the ring, she started crying. She could never forget that she lost the ring. lt was for her a symbol. lt was given to her in recognition of her abilities and achievements . And now it was restored to her. It was restored together with a believe that there were still good and honest people in the world, and that maybe one day, the world would come back to its senses.