From Dzialoszyce to Philadelphia – a Story of a Hidden Child 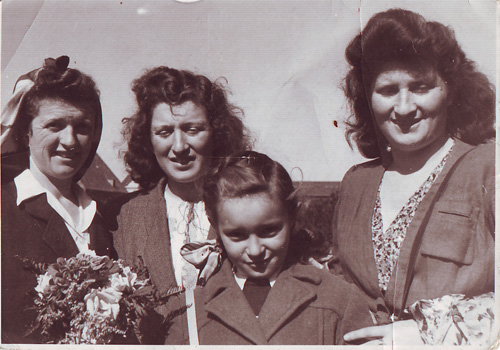 Sally Bass was born in 1937 in a small town called Dzialoszyce (pronounced jah-woh-SHIH-tseh, or Jollashitz), which is in Świętokrzyskie Voivodeship, Poland. The closest major city to Dzialoszyce is Krakow, which is about one hour away by car. Sally’s birth name was Sala Nisenbaum. Her parents were Ruchla Rozdzial (b. 1911) and Zelik Nisenbaum (b. 1910). Sally’s siblings were Josef (b. 1931), Hershel (b. 1933), and Chana (b. 1939).

From the 16th century until World War II, Dzialoszyce had been predominantly occupied by Jews. Life was generally good in Dzialoszyce, where Jews lived in relative comfort, mostly trading in goods such as grain and building materials. The brick synagogue, built in 1852, survived fires, floods and vandalization, and is still standing. The Jewish population of Dzialoszyce hovered around 5,000 in the early 1900s and increased to 7,000 in 1939 when the German Nazis invaded. In September 1942, the Nazis rounded up the Jews of Dzialoszyce, murdered at least 1,200 of them on the spot, and murdered almost the rest of them at Belzec Death Camp. Fewer than 200 survived.

Sally’s ancestors on both of her parent’s sides have a long history of living in and around Dzialoszyce, dating back to at least the early 18th century. Sally’s father, Zelik, and grandfather, Hersz Nisenbaum, were self-employed millers and sold grain. The Nisenbaums were very successful and enjoyed relative wealth and good fortune. They owned a house at 13 Skalmierska Street in Dzialosyzce. Sally’s cousin, Eliahu Rozdzial, another hidden child survivor, wrote a book entitled “Alone in Hiding” about his experiences living in Dzialosyzce and surviving the Nazi invasion. Eliahu died on a kibbutz in Israel in 2010.

In 1939, as the Nazi invasion and occupation of Dzialoszyce was imminent, Sally began living with Adela Nemeth, in Krakow. Adela worked as a midwife in Krakow. She was born in Czerniowce, Chernivtsi, Ukraine in 1892, the daughter of Marcin Nemeth and Anna Zrubecz (Nemeta). Adela may have delivered Sally and/or her younger sister, Chana. It is not clear if Adela was married, however she did not have any biological children of her own. Adela agreed to hide Sally during the war and return her when it was safe. At the age of two, this would be the last time Sally would see her biological parents and siblings.

Sally, living under the assumed name of Mariska Nemeth, lived with Adela at ul Pradnicka 15 in Krakow during the war. Adela told others that Mariska was her niece. They experienced at least one close call when the Gestapo knocked on their door, looking for Jews.

In September 1942, the Nazis liquidated Dzialoszyce. The Nazis systematically murdered the women, the elderly, and the children of Dzialoszyce. Able-bodied men were temporarily sparred, and sent to Belzec Concentration Camp, were they were ultimately murdered. Among the casualties in 1942 were Sally’s two brothers, sister, mother, and almost all of her extended family. Sally’s father, Zelik, temporarily escaped the grasp of the Nazis, but was ultimately discovered, and murdered as well.

The Nazis confiscated all of the Jewish homes, property, and businesses of Dzialosyzce, including that which was owned by the Nisenbaums. They destroyed the Jewish cemetery, using the headstones to build roads, and they vandalized the synagogue, which ultimately lost its roof in a fire.

All of this happened when Sally was around five years old, generally oblivious to these events, hiding with Adela Nemeth in Krakow. Sally grew up in Krakow, unable to attend school since she didn’t ‘exist’ in the Polish and German records. Adela was a very religious woman who brought Sally to church with her each Sunday. Church was one of the few, safe places for Sally. Adela home-schooled Sally to the best of her ability, teaching Sally to speak Polish, German, and French. Adela told Sally that she was Jewish, but that she could not tell anyone because she and Adela would be killed if their secret was revealed. Sally witnessed several Jewish people get murdered at this young age.

Sally’s father, Zelik Nisenbaum, came from a family of 11 children. Three of his sisters survived the Holocaust, Rose, Regina, and Sophie, all of whom lived to an old age, but have since died. Sophie was sent to Auschwitz Concentration Camp where she survived because she pretended to be Catholic and sewed uniforms for the Nazis. Sophie was a very talented seamstress.

Like Sally, Rose and Regina survived by hiding from the Nazis. They lived in a schoolhouse in Stradow, close to Dzialoszyce, in the home of Stanislaw and Jozefa Pachocinski, both schoolteachers. The house was crafted with a false wall that covered a stairway to the basement where Rose and Regina hid.

One day in June 1945, after the war had ended, 15 of the Jewish survivors returned to Dzialoszyce to reclaim their homes and property. They spent the night together, living in one house, thinking that there would be safety in numbers. They were wrong. The Polish residents of the town attacked the house, killing 4 Jews. The other 11 Jews escaped. Dzialoszyce has not had a Jewish resident since.

When the war ended, Sophie paid a visit to Adela Nemeth and asked her to return Sally into their custody. Sally was eight years old and had no recollection of her Aunt Sophie or anyone else from her family. As far as Sally was concerned, Adela was her mother. Adela, unable to have children of her own, was reluctant to give up her Mariska.

Given her previous agreement with Sally’s mother, Adela was torn. She consulted with her priest, who convinced her to give Mariska to Sophie because she will ultimately end up in the United States, where life will be better. The priest was right.

Sally and Sophie traveled by train to Feldafing, Germany, and lived in a displaced persons camp, where they were eventually reunited with Rose and Regina. The four of them lived in one room at an old army barracks. At the age of eight, Sally began attending a real school for the first time at the camp.

After spending more than a year at the displaced persons camp, Sally and her three aunts came to the realization that they would no longer be welcome to live in Poland, their ancestor’s homeland. Although they were not welcome to live in Dzialosyzce, the aunts owned the house at 13 Skalmierska Street and offered to deed the house to Mr. and Mrs. Pachocinski. The couple refused to accept the deed to the house because they felt that it could be viewed as a transaction in exchange for hiding Rose and Regina and did not want to pay repercussions from the surrounding residents.

Sally and her aunts came to the realization that their ancestor’s property was confiscated and they would need to start again with nothing in a different land. Sally and Sophie were granted passage to the U.S. in January 1947 on a U.S. Navy ship called the S.S. Ernie Pyle. The ship held 628 Holocaust survivors including 92 orphaned refugee children. Traveling by ship across the Atlantic Ocean in the winter was rough. During the journey, which took more than a week, almost everyone on board got terribly seasick. They finally arrived at Ellis Island in New York. When the Statue of Liberty came into view, everyone cheered loudly.

Sally and Sophie settled in Philadelphia, Pennsylvania, and were soon reunited with Rose and Regina, who were ultimately granted passage to the U.S. as well. At the age of 10, in November 1947, Sally was adopted by Phillip and Sadie Nordenberg, a Jewish, childless couple living in the Bronx, New York. Phillip immigrated to the U.S. with Sadie and her parents from Plock, Poland (near Warsaw), in 1904, when Phillip was 9 and Sadie was 2 years old. Phillip fought valiantly on the battlefields of France as part of the inaugural 82nd Airborne unit of the U.S. Army in WWI in 1918. Phillip and Sadie were married in 1919.

Phillip and Sadie taught Sally how to speak English and Yiddish. Despite learning English at such at late age, Sally excelled in school, graduating high school as the Valedictorian at the age of 15. Sally then went to Hunter College in New York City. She was a brilliant student, graduating with a degree in Education at the age of 18. Sally went on to become a schoolteacher in the Bronx, spending most of her time teaching special education children and ultimately earning a master’s degree in Education.

Sally had three children, Debbie, Dean and Neil. She is currently alive and well, living in Delray Beach, Florida. 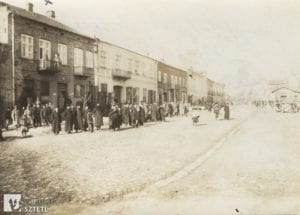 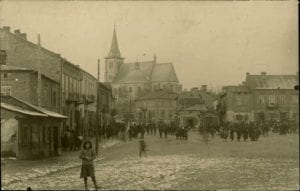