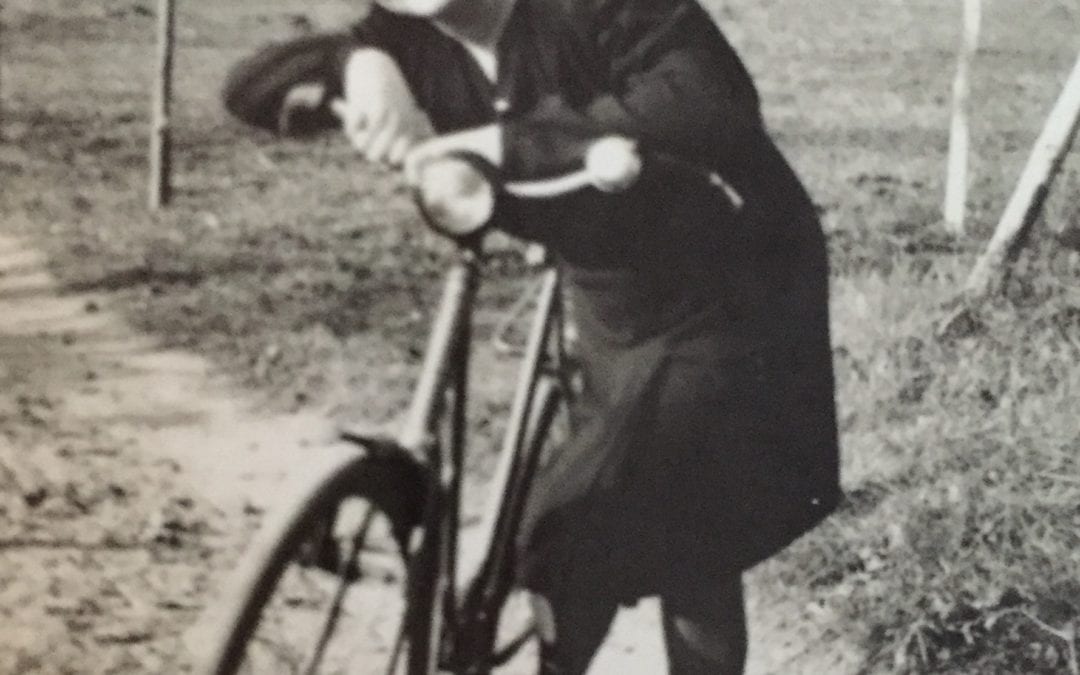 Submitted by: Bonnie London My mother grew up in the tiny village of Nyirmada in Eastern Hungary. She was the youngest of six children and the second girl. The town of 2600 had 484 Jews of which only 44 survived. My grandfather was a scholar and active in the Orthodox Jewish community. His bakery fed most of the towns people and on Friday afternoons my mother delivered challah and cholent for Shabbat. There is actually a home in the town that is very old but has a retractable Sukkah roof. It was the first one I’ve ever seen.

In 1938, knowing the borders would soon close and when the news was becoming more grim, Hungarian Jews were in fear, my Uncle Bill managed to come to America with plans to convince my grandmother’s uncle to assist them with $25000 to escape. He refused, saying no life was worth that much. His extended family did not survive.

By then, two uncles were drafted to fight the Russians at the Hungarian border and were treated like slaves of the Hungarian army. My Uncle Andor was shot and badly wounded. He ended up in a hospital in Kiev. My Uncle Sandor was captured & became a Russian prisoner in Siberia.

On the first night of Passover 1943, word came that they were being sent to the ghetto in a nearby town. They were to meet at the temple with no more than 40kg of belonging.

One of my mother’s most impactful memories was of the towns people – “yesterday’s friends and neighbors” – now watching and laughing as they were brutally marched out of town.

They had to leave a generational home, a thriving bakery, the temple and Jewish school that they helped build. The family home and bakery were located next door to the Calvinist church in the town, which still stands.

My grandparents, Aunt Margit, her husband, along with her two toddlers Gabor and Bela, did not survive after the selections at Auschwitz. My Uncle Zolly died just as Auschwitz was being liberated.

My mother, then 17 was strong and pretty. She was spared the gas chambers only to barely survive the hell of Auschwitz . She was liberated by the British at Bergen Belsen. She recovered in Sweden and joined my Uncle Bill in America
There is so much more to this story, but this is about our property. All our family photos in Hungary were taken at the same wall next to the Calvinist church.

In 2016, we visited Nyirmada. I had made contact with a wonderful woman in the town that was born in 1944 and didn’t find out that she was Jewish until she was a teen while her father was dying. She was a professor and had chronicled Jewish heritage and the Holocaust in Nyirmada for the 70th anniversary of the Holocaust. It became a textbook taught in the local schools for a time but is no longer used. The book had marvelous old photos documenting Jewish life in Nyirmada.

She was an excellent tour guide and host for us. She planned a luncheon and invited the Mayor and his wife to attend. We felt very welcome. We toured the lovely Jewish Cemetery that has been locked and closed, but somewhat maintained. There are no Jews in Nyirmada today. The Jewish school is now a community center. She told me that at some point our bakery or perhaps our home, became a salon where, as a child, she got haircuts. It was three doors down from her home.

Our house was no longer there, but we recognized the property by the fence and wall next to the Calvinist church. I cried seeing this place where happy times were documented in photos. We were able to tour the church and grounds and gaze at the back yard that was my mother’s playground as a child. We were not allowed in the vacant house built on the property. We were told that it was being demolished to build a pharmacy. At the street edge of the property stands a war memorial for Hungarian (not Jewish) soldiers lost in the war.

Next door was a bakery, but they told us it was not our bakery. I feel suspicious that it was, given the age of the place and location and the fact they would not allow us past the very interesting old gates.
We may never know.

When my mother was close to the end of her very special life, she wrote a letter, in Hungarian, to her town. When I asked why she wrote it in a language that none of us understood, she said “I want them to know.”
That was the purpose of my trip to Nyirmada. I delivered a copy of her letter to the Mayor of Nyirmada. it gave me the closure I needed to accept the loss of such an incredible mother. 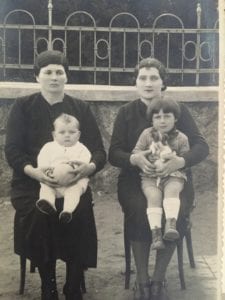 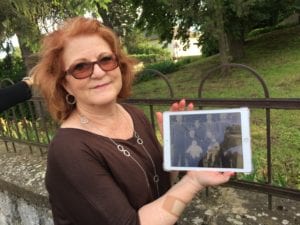 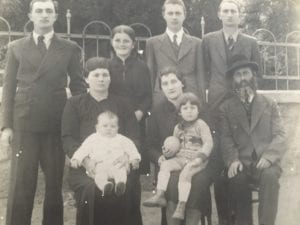 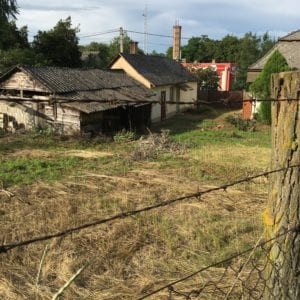